Safety from the sky: Shark spotting drones rolled out across Australia

What do you do when you become the killer shark capital of the world, have to ban residents and visitors from even entering the water and your tourism industry goes into freefall?

The answer, in the case of Reunion Island in the Indian Ocean, is ask Australia for help.

SharkSpotter is a world-leading artificial intelligence technology developed by the University of Technology Sydney (UTS) and operated by the Ripper Group which owns the drones. The technology was used on the French island near Madagascar this year to help identify bull sharks terrorising surfers and swimmers.

This summer, as part of a deal signed with the Westpac Lifesaver Rescue Drone program on Monday, drones will also be used in 51 locations across Australia, 21 in NSW (including Sydney’s northern beaches and along the Central Coast).

Professor Michael Blumenstein, an associate dean (research strategy and management) at UTS said SharkSpotter technology has been used throughout Australia’s east coast, but taking it international presented some new challenges.

“We created the software from scratch. We can distinguish between 17 types of objects, including boats, humans, rocks, and various marine animals,” he said. “After using the technology in Queensland and northern NSW, this year the team took their equipment to Reunion Island, which has had its tourism industry virtually destroyed because of shark attacks.”

Since 2011 Reunion has had 20 shark attacks, with eight deaths.

Mr Blumenstein said the marine environment was very different to Australia, with a lot more rocky shorelines and a much steeper drop off.

“The AI technology is just right for doing certain problems. We wrote some algorithms based on deep learning. This means the technology can be ‘trained’. So it was able to adapt to the different environment over there

The challenge was working with a drone and providing instant analysis, Blumenstein said. “There’s no taking it to the video referee. It has to work in real time.”

The general manager of Ripper Group, Ben Trollope, said Westpac was backing the rollout with SLSA this summer. Last season drones were deployed at 11 locations.

“This year is a major expansion for us and we are delighted to be working with lifesavers. We do the research and development and we gift that to SLSA to operate on the beaches,” he said.

Mr Trollope said Westpac Little Ripper was working with Ocean Guardian and Shark Shield to develop the first shark deterrent to be deployed from a drone, expected to be in use by the end of January.

He said the world’s first surf rescue using a drone took place in January this year in Lennox Head, when two swimmers were saved after they used a life-saving pod dropped from a drone that spotted them struggling in the surf.

“We have the mini-ripper, which are sub-2 kilogram category which allow us to deploy a two-man rescue pod plus a shark alarm,” Mr Trollope said.

“The Little Ripper is far bigger, with a far greater lift capacity, zoom camera and a two-way shark alert system with multiple pods.”

As well as rescue pods, the drones can carry sea marker dye, first aid kits, EPIRBs and even a defibrillator.

Mr Trollope said the drones can travel up to seven kilometres but under CASA regulations they have to stay within visual line of sight of the operator, which means a range of up to 1.5 kilometres on bigger drones.

“It is very difficult to use your eyes to spot sharks. Testing has shown you get about 12-17 per cent for accuracy for manned aviation. But with drones, you are getting up to 90 per cent accuracy,” Mr Trollope said.

Little Ripper are also developing drones for use in Far North Queensland with SLSQ and the state government to spot crocodiles and are looking at adapting the AI to spot rips and swimmers in distress.

There have been 15 “unprovoked” shark bites in Australia this year, seven in NSW, according to Taronga Zoo’s Australian Shark Attack File. 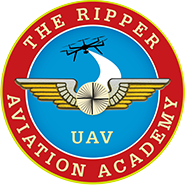